Was it an accident? Was it misjudgment by the Captain? Did the White Star Line make a pressure? Now, afterwards, it is very easy to come with statements that could have prevented this terrible tragedy.

No matter what, in the hours before Titanic set sail into the history, they got several messages from various ships about observations of icebergs. During this particular afternoon they got no less than six messages about icebergs.
Why did Titanic maintain as high speed as 20 knots, even after the darkness of night came? (20 knots equals 33 feet/sec, and a ship of 46.000 brt. don't stop on a penny!). Captain Smith could have had personal reasons for this. After all, this was his last voyage before retirement, and the possibility to end it with an new record across the Atlantic (arrival New York Thursday evening instead of Wednesday afternoon) might have seemed great. And for the White Star Line this would have been a great Public Relation, they were to compete with others in the traffic across the Atlantic. And the struggle for power were not much different than it is today. (But those days, the motto was 'Go Ahead or Jump Off'. Besides, the RMS Titanic was not capable of a speed over 21-22-knots.)

- Some speculators indicate that the White Star Line were so near bankruptcy, that they sacrificed Titanic, so they could collect the money from the insurance company later. (This might be a rather doubtful explanation since they always paid all their bills in time who ever they owed money.)

- What about the other conspiracy theories?

- What about the fire (or explosion) in the coal bunker No.5? (This was a normal incident in those days, and the fire was extinguished the day before.)

- Was it all planned?

Why did the RMS Titanic sink?

This is the BIG question the whole world has been trying to get an answer to ever since 15.April 1912.

In 1994 some scientists that could explain why RMS Titanic sunk and sunk so fast. They analyzed a piece of the hull, collected from the grave of Titanic and compared this with plates from more modern ships. First they did a stretching-test, but the results showed no particular difference (neither did it at H & W in 1910). But when they were to bend the plates, something happened. The piece recovered from Titanic broke in pieces! A closer investigation showed that the steel plates contained a great amounts of sulphur and this makes the steel brittle when you try to bend it. But later this theory was dismissed.

Or could it just be that RMS Titanic hit the iceberg at the most damaging angle, hitting the a treacherous lump on the iceberg with the most vulnerable aerea on the hull, right under the waterline?

She were supposed to be 'Unsinkable'?

How do You feel about
exploring in the RMS Titanic? 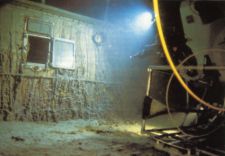 Is this grave robbery? Is it scientific investigation? Is it morally acceptable to recover artefacts from Titanic and sell it as souvenirs?

My personal opinion is: This is a grave.
Titanic was an exciting and a great ship that disappeared in a very tragic way, and that no one ever expected to seen again. When she later was found, I hoped she would get her peace at last. The artefacts (or 'debris' that they call it so they don't offend someone....) that the latest expeditions have recovered is purely grave robbery in my opinion. Not so very long ago (28.Sept. 1994) another ship-disaster took place, this time in the Baltic Sea with MS Estonia.
As time fled by, I followed the discussions about recovering the remains of the passengers with strong feelings. And my feelings got even stronger when I heard the survivors telling about the disaster and the feelings they now had to live with, and how the relatives of the desisted wanted to bring up their loved ones.