High up in the crow's nest, Lookouts Fredrick Fleet and Archie Lee stared into the darkness looking for dangerous icebergs. The north Atlantic air was cold and pinched the two men in their faces. The sky was clear as crystal with more stars than you ever would believe. The sea was calm and flat.

Because of an misunderstanding between the officers on the last shift, the two men were not equipped with binoculars. But they probably would not have had any use of them in the darkness that surrounded them (infrared technology, sonar and radar were still a few years from being invented). Peering through the darkness, Fredrick Fleet became aware of a massive grey shadow that grew bigger right ahead. He quickly reached out for the crow's nest bell and rang it three times. Then he picked up the phone, and when someone picked up the other phone, he heard the Sixth Officer Moody anxious voice:

"What do you see?"
"Iceberg right ahead!", Fleet answered. Moody replied shortly:
"Thank you.", and hung up.

"Iceberg right ahead!", Sixth Officer Moody repeated down onto the bridge. First Officer William Murdoch glanced out of the window, saw the iceberg getting closer, turned around and shouted "Hard starboard!" to Quartermaster Robert Hichens. Murdoch quickly glanced at a set of printed instructions :

In case of emergency
To close watertight doors on tank top,
press bell; push for 10 seconds
to give alarm; then move switch to
"on" position and keep it there.

He then reached for the lever which electronically activated the doors. The Quartermaster immediately responded to Murdoch's command, and had by this time spun the wheel, until it could turn no more. The crew at the bridge looked out through the windows; Would she turn away in time? First Officer Murdoch felt relief when the RMS Titanic didn't hit the iceberg head on, but he also realized that there would be a collision, no matter what. Just when it seemed that she would get clear of the iceberg, they felt a slight vibration coming from deep within the ship.

Most of the passengers were completely unaware of the tragedy that just had begun. Some were asleep, some were undressing, some playing cards and others had gone for a night-cap in the smoking-lounge. But some of them saw the iceberg passing and disappearing in the dark. 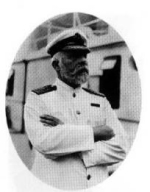 Titanic's captain, Edward James Smith who earlier had left the bridge with the order: 'If there is any doubt, let me know.', now returned to the bridge and asked Murdock what they had hit.
"An iceberg, Sir.", was the short answer. Captain Smith now faced the terrible fact that his ship had been damaged, but how seriously he did not yet know. And furthermore, he had not been present on the bridge during the most critical part of the voyage.
But now he ordered Fourth Officer Boxhall:
"Go down and find the carpenter and get him to sound the ship." Twenty minutes later, Boxhall returned to the bridge and reported to Captain Smith. Without saying a word, Smith turned and walked away. He was now aware of the fact that the ship did not have enough lifeboats to accommodate all of her passengers. For the first time in his 40 years at sea, he had to give the order "Abandon ship!". After informing his officers about the situation and how to handle it, he went to the wireless room.

Here he asked Jack Phillips:
"What are you sending?"
"CQD", Phillips replied, and Harold Bride then proposed:
"Why not send SOS? It's the new distress-signal."

And so they began using morse code to send this new international distress signal. In fact, this was one of the first times it was used.

Now, at 00.05, just 30 minutes after Fleet and Lee saw the iceberg, the crew begun lowering the lifeboats. At the same time they could observe that RMS Titanic was tilting forward.