A survivor's story from MS Estonia

On a cold night in september 1994 the "MS Estonia" a 20.300 ton passenger vessel left the port of Tallinn enroute for Stockholm. It was a stormy night. On board were 1.054 passengers and crew.

Around 12 AM, many passengers heard terrible noises from the cargo deck. Some passengers were in the restaurants and most of the young couples and teens were in the disco, but the main part of the families were already asleep.
20 minutes later the ship started listing, heavily! In the bar where I worked, the bottles and glasses started to fall of the tables, and a TV set fell off the wall and smashed into a couple that was sitting underneath it. The passengers started to move out into the open decks as the ship listed more and more and the sounds of falling furniture and screaming people got louder and louder. 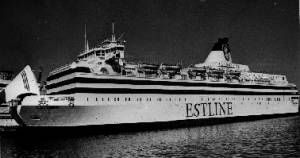 I tried to call the bridge, but there was no answer, and no alarms were sounding, 5-10 minutes later the ship was listing so much that the water started to climb above the windows of the 6th floor. I was in the main staircase and tried to get some clue as to what was happening. There were a lot of passengers trying to get up to the boat deck. I saw a woman falling from the stairs below and nobody tried to help. Everybody was just climbing on top of everyone else to get up as fast as possible.The sounds of people screaming, falling objects and breaking glass was terrible! Now the ship was listing so much that the railing touched the water. I was still in the main staircase with some other crewmembers were we tried to help as much as we could. Suddenly a Coke-machine fell from the upper case and into stairs below and fell onto some people. It crushed a young girl, and nobody could help.

At this point my colleague screamed at me: "We'd better get the hellout of this thing!"
The lights flickered and went out and the only light left was the emergency lights. We smashed a window with an axe and climbed out, helping three or four others with us. We were now standing on top of the vessel, that is on the side. We could look into the windows of the cabins, fortunately there was no light, so we couldn't see the people inside.

When the ship sank even more, it listed with the front down, we walked directly of the side and into the cold water. The waves was covering the ship as we swam in the water just looking at this huge vessels sinking; the stern lifted in the air, just like the Titanic, and then sank quickly.

There was an explosion or two and then silence until we could hear the screams for help of many people in the water. These screams is something that will haunt me for ever.

We were lucky to get into a life raft; the ship had automated life rafts that inflate and surface when the ship sinks, but it was so cold, and there was lots of water in the raft as well. We knew from our training that hypothermia was our worst enemy so we tried to sit together with 11-12 other people in the raft.

We sat there for hours until rescue helicopters came and started to pick up the survivors, in our raft only 8 people made it. We had to warm ourself with the small amount of heat left in the bodies. That's one thing that I'll never forget.

When the helicopter arrived at our raft they had a news crew on board and they started filming us, before they even tried to rescue us. This resulted in another passenger, that, when he entered the helicopter, hit the cameraman right in the face!

The helicopter took us on board a swedish cruise ship, the 80.000 tons "Silja Symphony" and then to the island of Åland. We were hospitalized for a few days, before we returned to Sweden.

917 people went down with the MS Estonia, 137 survived and she sank in less than 25 minutes because of a fault in the locks of the bowport. The locks failed and the bow fell of the vessel, giving free access to the cargo decks that quickly filled with water.

Recent explorations of the wreck site has found the "MS Estonia" lying on the side 240 feet down. Divers have found 125 bodies in the restaurants and bars, and about 600 are still in their cabins; whole families are buried down there.

This is the worst disaster in the history of Scandinavia, and nobody responsible survived. All officers and the captain are still on the bridge, their bodies were found when divers entered to get the watertight computer tapes that were located on the bridge. The final report on the loss of the MS Estonia has recently been released for public viewing, but gives no answers to the many questions.

I hope this gives you an idea of what it was like, and I belive it was like this on the RMS Titanic too!

Now, almost 18 years later, not a day goes by without thinking of the "MS Estonia"

But for those of you that are wondering, I'd like to remark that I'm still working on a cruise ship, and every time we board new passengers, I can't help thinking:

Can we save them all?? Just in case we are to experience a "worst case scenario"
Will we be able to save all souls on board??

I'm afraid that history tells us: NO, We cannot! Counting from the Titanic and up to the present, I can't think of any disaster involving the total loss of a passenger vessel where all have been saved.

Now, why is that?? Today, our ship has every modern rescue and communicationequipment, and still, last week a passenger vessel from my line crashed into a supertanker of the coast of Sweden. Minor damage, of course, but still:

Why is it that accidents still happen, despite all of the modern equipment?

I'll tell you why. Because of the human factor. Humans react very different from what they are supposed to in the event of a disaster.

60% of the people become totally inactive. They don't do anything, and even if you tell them what to do, they still don't.

Another 10-12% panic, totally panic. They do stupid things; scream, cry, and are not able to save themselves.

The next group of people are the ones, that don't do anything themselves, but expect to be instructed of what to do. If you tell them, they will do anything you say, but if nobody tells them anything, they will most likely perish.

The next group are the ones that only think of themselves. They are dangerous, because they will do nothing other than save themselves; they even leave families and loved ones behind.

The final group of people are the opposite. They will do anything to save as many as possible, and often with great risk of their own lives.

If we use my ship as a guideline; 38.500 displacement, 2.400 passengers and 550 crewmembers, equipped with 10 lifeboats and lots of automated life rafts.

If the first three groups are unable to save themselves and nearly has to be dragged by the hair (we're talking about 1.800 people scattered all over a ship 13 decks high) and some may be hiding in fear. A part of the ship may already be flooded and inaccessible and some may just sit in the nightclub totally numb, and when the power fails, it will take even longer to evacuate the vessel.

How are we supposed to save them?? If the accident occurs at night, passengers and crew are asleep. It takes time to assemble the crew, and what if a part of the crew is killed in for example a collision?

The fourth group, the self centered one, will often slow down the rescue and are time consuming to deal with.

The last group will save themselves, but still does only count for 10-12% of the passengers.

The critics of my opinion may say that, "It will take a lot of time for a ship that big to sink." And my answer is: "Really?"

And what if we are being hit by a supertanker going 20 knots at 3 AM in the morning?
(The force of 300.000 tonnages of steel are so enormous it can't be imagined.)
And then loaded with oil!! What a cute fire that would be??

Well, the chance of us being hit like that is small; But it's not impossible!

And even if the ship doesn't sink as a result of that collision, some people are sure to drown, and then I'm still right. If something happens, we can't save everybody!

Now.. The storyteller would appreciate any serious comments (titanic@white-star.com) you might have to this.